Skip to content
Home
>
The Parent Voice
>
Delilah Under The Weather

Delilah Under The Weather

A few weeks ago, Delilah, Joshua, and I were all sick. Thank goodness it got us one by one so we weren’t all miserable at once. Someone had to be well enough to take care of the rest of us!

So far I feel like we had been lucky when it came to the health side of things. Delilah had never had more than a slight fever when teething up until now. The fancy “snot sucker” device that pregnant me thought I just had to have, is still unopened in its box.

Delilah was the first one of us to get sick. I’m still not sure what she had because she didn’t have a cold and the only flu symptom she had was a fever. For the most part, she was just under the weather. We could tell she wasn’t feeling well shortly after we got up for the day. We started the day normally but I could tell she wasn’t herself at breakfast. When I took her out of the high chair I noticed that she felt warm and decided to take her temperature. She was running a fever of about 101.6.

Though she didn’t want to eat food she was still happy to drink her milk. That gave me some relief because it would help keep something in her stomach and help her stay hydrated. All she wanted, while she had her bottle, was cuddles so we posted up on the couch and called it a lazy day to give Delilah all the rest and cuddles she needed to feel better. 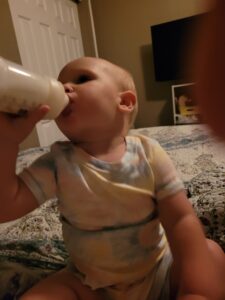 The rest of the day went kind of in a cycle of Delilah napping, checking her temperature, giving her water or milk, and then back to cuddles. She really didn’t want to do anything other than that. I don’t want to say I was scared about her being sick for the first time, because her fever stayed under 102 and she was still staying hydrated. I knew the illness just had to run its course, but it was really hard to see her sick. Where she’s normally smiling and laughing all day long she just seemed so tired and so sad and that was hard to watch.

The next day she was feeling a wee bit better. She had a little more pep in her step and was only running a low-grade fever. She still didn’t feel like eating very much at all but she did eat a little fresh fruit and a yogurt pouch. We were still taking it pretty easy during the day, occasionally she’d decide to get down and go play for a bit, but overall she was still more tired than usual. In the late afternoon she told me she wanted to take a shower, (she calls it “Sha-sha”), and that definitely seemed to cheer her up. She had more energy and was smiling a lot afterward. 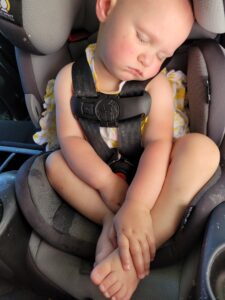 Shortly after Delilah started feeling better, I started feeling bad. A few days after Delilah was back to normal I just had no energy all of a sudden. I had felt fine that morning but by the time afternoon rolled around, I was so drained I could hardly get off the couch. I drank some of the Pedialyte I had gotten for Delilah and hoped I had just overdone it a bit earlier in the day and that I would feel better after some rest. I was hopeful but I also had a dull ache in the back of my throat that made me doubt that I would feel any better tomorrow. 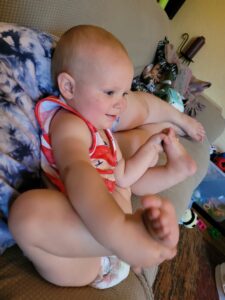 And without fail, I woke up the next day feeling even more drained. No fever but I also noticed that whenever I tried to swallow food, even if it was soft, felt like I was trying to swallow broken glass. That’s when I put the pieces together and realized I had strep throat. I’ve only had it once or twice before but the memories alone were enough to send me flying to the urgent care before it got any worse.

Not two days after I started feeling better, Joshua starts telling me he’s feeling kind of tired in the afternoon and was going to take a nap. Right then I was worried he was getting strep too. Even if you try to keep your distance, I feel like, by the time you find you are sick, your spouse is usually already doomed. When he woke up from his nap he was defiantly sick and running a fever. I’m still thankful that only one of us got sick at a time or else I’m not sure what we’d do. Even though only one of us was sick at a time it still took almost a week to get caught up on housework and laundry. After a thorough deep clean and 15 loads of laundry later were finally all healthy and back on track.

Hailey
Health
Go back to all articles

Delilah has started sharing a lot of her opinions and so we've been learning all of Delilah's Favorite Things. So I've started writing things down and taking notes and here is her current list of Favorite Things
Read more »

When it comes to activities and celebrations September - December has to be my favorite time of year, so, I thought it would be fun to list all the activities I'm looking forward to this season.
Read more »

The Girl’s Got Personality

As Delilah's getting older it seems as though her personality is developing more and more each day!
Read more »

Delilah has started sharing a lot of her opinions and so we've been learning all of Delilah's Favorite Things. So I've started writing things down and taking notes and here is her current list of Favorite Things
Read more »

When it comes to activities and celebrations September - December has to be my favorite time of year, so, I thought it would be fun to list all the activities I'm looking forward to this season.
Read more »

The Girl’s Got Personality

As Delilah's getting older it seems as though her personality is developing more and more each day!
Read more »