girl is growing so fast and I can hardly believe it!

Last week, after shopping for 12-month-sized winter clothes for Delilah, I showed Joshua a new pair of pajamas. He couldn’t believe how the tiny baby we brought home from the hospital could ever fit in clothes that big.

Last week we had her 6-month well-baby checkup and a day or so later we went through the 6-month Ages and Stages Questionnaire (ASQ). We scheduled Delilah’s appointment early in the morning. I’ve found that works best for her if we get her in before her morning nap, then she usually falls asleep on the car ride home. This time my big girl weighed almost 18 pounds! 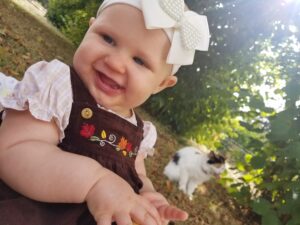 After doing her measurements with the nurse, I talked with her doctor and this time I had a lot of questions. Most of them are about feeding. I think feeding her solid foods has been one of my favorite parts of parenting so far. We have had so much fun trying different foods with her and it’s rewarding to see how much she enjoys them. She’s already filled out most of her chart of foods I wanted her to try. Plus, we had to add a few more foods when her grandma reminded me to expose her to foods even if I don’t like them – I’m looking at you, cantaloupe!

My questions at this appointment were about introducing different types and textures of food, specifically eggs and yogurt. Both eggs and yogurt are a huge part of our diet because they are high in protein. I was hoping to be able to introduce these alternate sources of protein into Delilah’s diet because she’s not too keen on the pureed meats. I don’t blame her because they have a strange texture! Her doctor said it was fine to give her eggs, yogurt, and really any other food as long as it was cooked and cut appropriately for her. The doctor said the next feeding goal is for Delilah to start feeding herself soft finger foods rather than purees by her 9-month visit. Following her appointment, we made some new batches of chunky baby food. These can be mashed rather than pureed and mixed in with softer purees for texture.

After talking to the doctor, it was time for the not-so-fun part of well-baby visits, the immunizations. Overall, it’s not so bad and we’ve gotten a pretty successful routine figured out. We look at her new book from the doctor while we wait for the nurse and that usually helps to distract her. If possible, I try to keep her engaged with the book up until she gets the first shot. We also learned to put her onesie on before the shots, because it’s never fun to dress an upset baby. Then, we give her lots of hugs and I have a bottle ready to help soothe her. Usually that does the trick so we’re able to put her in the car seat and she falls asleep on the ride home, and we always devote the rest of doctor days to lots of cuddles and naps.

A few days after the appointment, we went through the 6-month Ages and Stages Questionnaire (ASQ) to see her current developmental milestones. We filled it out after dinner while Delilah was sitting in the high chair which helped with a few things on the fine motor part of the questionnaire. 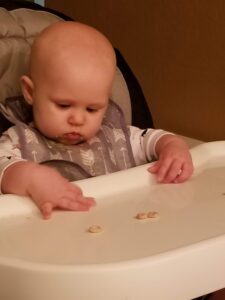 She’s doing really well with communication. It was funny to learn that her loud screeching sound that she loves to make is actually a milestone most babies go through, which I didn’t know. It was also fun to see changes in her development even over the course of a few days. The doctor asked if she had started making consonant sounds like Ah, Ba and Da. At the time, she was only doing this a little but not too often, but by a few days later she was making all kinds of sounds, mostly Ba-ba.

There were a few activities in the fine motor section of the ASQ that we hadn’t tried yet, like letting her pick things up to feed herself. She’s pretty good at getting her spoon to her mouth after dumping all the food on her clothes, but we hadn’t let her try to pick up little things and get them in her mouth. So, we broke out the plain Cheerios and let her give it a try. She picked them up like the ASQ question and even managed to get one in her mouth. Now, we give her a few to play with at breakfast time even though more of them end up on the floor for the dogs than in her mouth!

We started giving Caleb solid food about three weeks ago and are slowly introducing him to different foods. Eating solid food is both an exciting milestone and a very terrifying one at the same time.
Read more »

Did you know that snacking throughout the day can cause cavities? But you can do some helpful things to prevent cavities, even with snacking. Let’s look at some ideas.
Read more »

We started giving Caleb solid food about three weeks ago and are slowly introducing him to different foods. Eating solid food is both an exciting milestone and a very terrifying one at the same time.
Read more »

Did you know that snacking throughout the day can cause cavities? But you can do some helpful things to prevent cavities, even with snacking. Let’s look at some ideas.
Read more »