One of the many goals we are working on with Delilah is to get her used to drinking from a sippy cup. It has been so much harder than I ever imagined.

Before offering her a sippy cup I read a few articles on tips to be successful at transitioning to a sippy cup. The next step was choosing the right sippy cup to offer her. I loved the MAM bottles that we use. They were heaven-sent when she went through a gassy phase some months ago. I noticed MAM makes a transitional sippy cup with a top shaped like a normal bottle top but with the flow control of a sippy cup. It also comes with a traditional sippy cup top. Starting with the bottle-shaped top is supposed to help a baby adjust to a cup more easily and be less likely to reject it.

Another tip I read was to put something different in the sippy cup, like water instead of breastmilk or formula, to encourage your baby to give the cup a chance and get the different drink. This was about the time we introduced Delilah to drinking little amounts of water so I decided to give her the sippy cup with water. I was hopeful at first because she was really excited about the cup, but she started to get frustrated after trying a few times to get the water out and it didn’t flow like her bottle.

After that, she played with the cup a little bit and then wanted nothing to do with it. I figured it would take a couple tries so we kept offering it to her. But it got to the point where she wouldn’t try the cup or play with it at all and just got mad when she saw it. I felt discouraged because I had tried it with water and again with breast milk and neither worked. I started to wonder if we should try a different cup.

One of the articles I read recommended skipping the sippy cup all together and just giving the baby a cup without a lid. Personally, I did not like this idea at all, but it would be interesting to know about those who’ve had success with it. That article also recommended the Munchkin 360 Miracle Cup for those who, like me, fear an open cup. This cup would be a smoother transition to a traditional open cup. So, we decided to try the Munchkin cup. 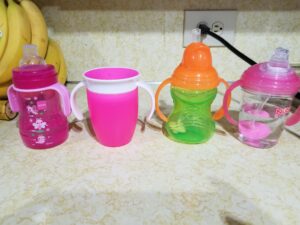 The 360 Miracle Cup is spill proof and is designed so that the baby can drink from any spot on the rim of the cup. Honestly, I thought this cup was neat and wouldn’t mind having an adult sized one. I tend to be quite spill-prone! Delilah, however, did not have the same opinion. She hated this cup right away. I was surprised because I thought she would like chewing on the rim of the cup until she figured out how to make the water come out. One thing she really did not like about this cup was that she had to tip it so far to even get her mouth around the edge. I noticed this with the last cup too, that she wouldn’t tip it back far enough to get the water out.

So, we were back to the drawing board. Due to her reluctance with the sippy cup Delilah had been getting the little amounts of water she needed in different ways. Her favorite was when we trapped a little bit of water in a straw with our finger, and then let the water drip into her mouth. She loved the water and she thought the straw was the most hilarious thing in the world.

This gave me the idea of trying a sippy cup with a straw so she wouldn’t have to tip it back. I know the straw style sippy cups are more for older babies and toddlers but figure it couldn’t hurt at this point. I bought a cup that had a straw that flowed the same as a sippy cup and with a weighted straw so it wouldn’t come out.

I thought for sure I had it figured out this time and that this cup would work!

Delilah liked this cup at first and she really liked chewing on the straw. It probably felt good to chew on because she’s working on her 3rd and 4th teeth, but she tired of it quickly and would drop the cup to chew on something else. And she was still not figuring out how to make the water come out of the cup.

At this point I was frustrated with buying so many different cups that didn’t work for Delilah. I had almost decided to just give up and ask her doctor at the next appointment.

I was venting my sippy cup frustrations to my cousin, who has two young children. She told me about a cup that worked well for her daughter and that she would try first when her son was old enough. It had the same weighted straw design but it had a more traditional sippy cup top. I doubted that this cup would be any different than the others, and wondered if Delilah just wasn’t ready for a sippy cup, but I decided to give it one more try.

At the store, while my mom shopped for other items, I compared all of the different sippy cup styles available and again doubted which would work. I needed a second opinion and literally took armfuls of sippy cups to my mom. Her advice was to try the one my cousin recommended and if it didn’t work then we could always try another. I guess once Delilah figures out how sippy cups work it wouldn’t hurt to have lots of cups.

So, I bought the cup my cousin recommended and gave it a shot. Delilah immediately took to it! The straw design helped keep the water near the top so she could still get some out while learning how the sippy top worked. After a few minutes I could tell that she wasn’t just chewing on the top and she was actually drinking water. She may have dribbled half of it down the front of her shirt but I was happy and she kept going back for more! She still needs some practice with it and we’re nowhere close to getting rid of the bottles, but I am over the moon that we finally found the right cup for Delilah!

Development
First Year
Hailey
Go back to all articles

Postpartum Anxiety – It’s real. I have it. It sucks!

We are constantly babyproofing and learning with our kids about what we can do to ensure that they are safe within our own home. It is challenging, and we cannot prevent all trips and falls, but we can protect them in other ways.
Read more »

Postpartum Anxiety – It’s real. I have it. It sucks!

We are constantly babyproofing and learning with our kids about what we can do to ensure that they are safe within our own home. It is challenging, and we cannot prevent all trips and falls, but we can protect them in other ways.
Read more »